In New York City, they say the tap water is what makes their pizza dough the best. Six hundred miles away, Flint, Michigan battled with dangerously contaminated water for five years.

With so much confusion about tap water safety for people, it’s understandable to question how safe it is for our dogs. So, should dogs drink tap water?

The dangers of dogs drinking tap water are limited. But, the EPA has found contaminates in some waters known to cause cancer. With filtered and quality bottled water, you decrease the risks of contaminated tap water and ensure your dog receives healthy water.

This article explains the risks of dogs drinking tap water and provides information about what’s actually in our water.

We do our best to protect our dogs. We provide quality food, healthy treats, and avoid dangerous toys. But are we spending enough time considering their water?

Tap water in the United States has been regulated and monitored since Congress enacted the Safe Drinking Water Act in 1974. The purpose of the act was to regulate 100 different contaminants from our drinking water.

Even with regulations, between 9 million and 45 million Americans annually get their drinking water from a source violating the Safe Drinking Water Act. Rural areas with a population of less than 500 are over 50% of the cases.

Tap water has a bad reputation. With stories of legionnaires disease in drinking water, lead in Flint, Michigans water, and confusion about the additives — water is hard to trust.

Today, the treatment and additives in tap water include:

With over a century of disinfecting community water, studies have shown additives to be helpful and harmless. The real risk in tap water is contamination.

What are the dangers of dogs drinking tap water?

Most municipalities across the U.S. regularly test and pass inspections for water contamination.

For instance, the Las Vegas Valley Water District used real-time monitoring to collect over 50,000 water samples in 2021 and conducted more than 318,000 analyses of those samples.

With so much safeguarding of tap water, should you be worried about the risk?

The Natural Resources Defense Council (NRDC) lists the following potential contaminants in tap water that may be harmful to you and your dog:

Most large cities and towns have highly regulated and relatively safe tap water. But, the EPA does have an acceptable allowance of some contaminates to slip through.

There isn’t enough research to accurately understand the long-term risks of dogs drinking tap water. And every city has different water and water contamination risks.

The most significant health risk for dogs drinking tap water is chemical exposure. High doses of chemicals can cause organ damage and affect the nervous system. Exposure to lower doses over an extended period is known to cause cancer.

For dogs in rural farming communities, the leaching of harmful cancer-causing chemicals into groundwater is riskier than in major cities.

While not directly connected to tap water, the American Animal Hospital Association estimates 1 in 4 dogs will develop cancer, with an increased risk in dogs over age 10.

To stay hydrated throughout the day, the average-sized dog needs to drink one 33.8 oz bottle of smart water. That’s why leaving water out for your dog is so vital.

By guaranteeing our dog’s water is filtered and fresh, we may be helping to extend their life and preventing harm — a small price to pay for the joy our dogs bring.

Does your town have tap water issues? Share this article with others to keep them informed of the risks. 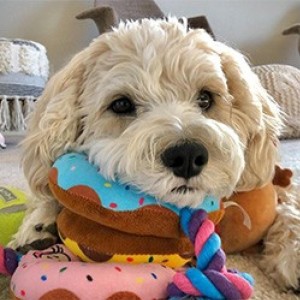 Hi, I'm TK. I'm the proud father of Shelby, a 7-year-old Petite Basset Griffon Vendeen mix. Shelby is a loving cuddler, and her many health issues early in life were heartbreaking to watch. Today, Shelby is happy and healthy, and I gained immense knowledge through the journey. Now, my passion is helping your pup achieve the same.

Restricting water for puppies at night. Is it Safe?

When you plan to crate train, it’s normal to question restricting water for puppies at night. It’s common, but there is a safe way to do it.

Should I leave water out for my dog all day?

Dogs need more hydration than you think. When asking should I leave water out for my dog all day, the answer is YES.

Dehydration Safety: How long can a dog go without water?

How long should and how long can a dog go without water is a serious difference. Dogs have a high need for hydration, and dehydration is severe.

Tap water has a scary reputation. Leaving many to question can dogs drink spring water? Spring water, like arrowhead, is a safe option for dogs.

Safe drinking water is vital for dogs, but can dogs drink smart water? With the added electrolytes, many dog owners wonder, but smart water is safe.

Tap water has a scary reputation. Leaving many to question can dogs drink spring water? Spring water, like arrowhead, is a safe option for dogs.

Safe drinking water is vital for dogs, but can dogs drink smart water? With the added electrolytes, many dog owners wonder, but smart water is safe.